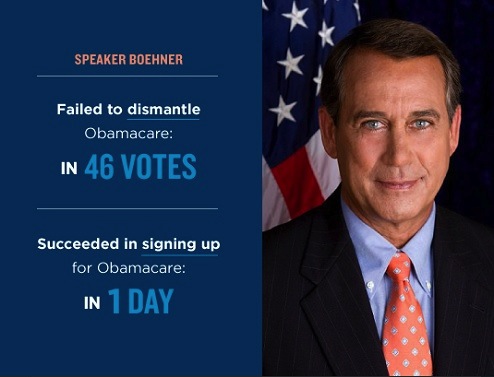 If you are looking to save money in our government the way to do that is to get the money wasting Republicans out of office. Suing the president because WAAAAAAAAAAAA they couldn’t overturn the Affordable Care Act is one of the biggest crybaby moves by a crybaby party we’ve seen yet.

The Republican-led House approved a resolution on Wednesday authorizing Speaker John Boehner to sue President Barack Obama over claims he abused his powers at the expense of Congress and the Constitution.
The vote was 225-201.

Republicans argue Obama’s executive orders in a number of areas were unlawful because it’s the job of Congress to make or change laws. But they believe his handling of the Affordable Care act gives them the best chance at proving their case, and are basing the suit on that issue.

House approves lawsuit against Obama An impeachment conspiracy? Boehner: No GOP plans to impeach Obama
House authorization now allows GOP-leaders to have the unusual challenge filed in federal court. The time frame for that is not clear and many legal experts question whether any judge would take it on.

John Boehner and the rest of pasty white republicans who approved this measure are just butt hurt that the President managed to pass THEIR STUPID HEALTHCARE BILL to help the American people. I am one such person who now pays a small amount of money every months to have HEALTH INSURANCE so that I don’t have to go to the ER when something bad happens to me. What is wrong with these fucktards? They could not overturn the healthcare law so they’ve opted to waste money with a lawsuit?

I am seriously hoping they all lose their jobs in the midterms, cowards that they are.