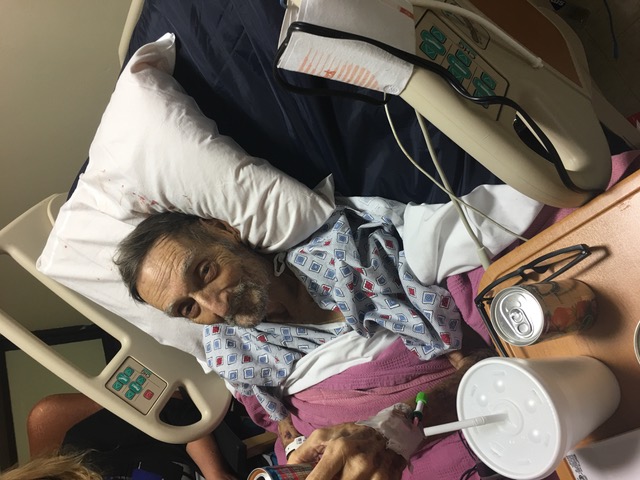 My dad is dying. He’s really finally going. He’s been going for a year now about. I watched the slow decline of someone who did not think anything was wrong with him, refused any sort of treatment for what ailed him, and then his body just decided it was time to let go. It’s been a long road, his death. And he isn’t quite ready yet. Somehow his strong heart keeps beating. I am realizing that death brings us to a point of celebration and love we couldn’t really get to before they pass. I am watching his friends and family come together to show him their love which is kind of amazing.

I don’t really write much here. No one really blogs as such anymore. They use Facebook or Twitter because the response is immediate – you can reach a much larger audience that way. No one reads this anymore – or ever – so it’s a “safe space” for me now to write if I feel like it. Tonight I feel like it because I want to record the time my daughter Emma and I went to his hospital room and watched Black Panther as he lay dying. He was in the VA in Westwood before moving to the hospice, where he is now. He was obsessed with watching the movie Dark Tower, starring Idris Elba and Matthew McConaughey. It’s not very good to me but to him it’s the greatest film ever made. It revolves around – at least as far as I can tell – a boy with special powers who has to be sent off to a school where they “understand” him better. My dad was sent off to school by grandmother because she – a single working mom in the 1930s and 1940s – could not care for him. He was a troubled kid – theft, drugs, eventually gangs before he found Jazz drumming as an outlet. He’s known in jazz circles of LA as a bit of a legend when it comes to drumming. One time his jazz friends came to his hospital room and jammed with him. He picked up his drums and played on a practice pad with them.

When people we love die we do have to come to some sort of conclusion about them. Were they good to us? Good to the world? Were they bad? We’re all a mixture of both, I would imagine, despite the internet’s mass hysteria daily that seeks to roust out anyone not “pure” and “good.” We all do make mistakes. Someday I’ll tell the whole story of my dad but for now I want to just leave it at: to most people he was never “enough.” Not enough of a son. Not enough of a man, not enough of a father or a husband. But to me he really was. As hard as it was to communicate with him at times he was a man of great kindness and compassion. THAT is something I will dearly miss.

So here’s to you, pops. Please do go gently into that great night. You have earned a little peace.