Camille Paglia on Miley Cyrus Gets it Right, and Wrong

When I watched Miley Cyrus’ vapid easy media get it did remind me of Madonna. How do you get people to pay attention to you if you’re appearing on the same show where Katy Perry is trying to launch a new image and Lady Gaga is starting her own launch? You have to be offensive, or more to the point, rip a page out of the Madonna playbook.

When you think about others who played the sex card overtly, before Madonna, they were all men. Madonna really did change things for female performers, making more than okay to use your sexuality to sell yourself – that’s what Elvis, the Rolling Stones, the Beatles, The Who, Led Zepplin had all been doing. The difference was –

Madonna’s music was fluff. She was selling sex and shocking her tween fans by igniting their own budding sexuality but her music sounded like every other dance track. In fact, in the beginning, before people saw what she looked like, many assumed Madonna was black. Her music was catchy and fun but it was nothing that could ever really succeed on its own.

That template has served many a female performer after Madonna – Beyonce, Lady Gaga, Britney Spears and now, Miley Cyrus. These girls/women are not required, particularly, to create brilliant, lasting tracks but to provoke while gyrating to a catchy dance tune, one that is jam-packed with formulaic hooks and electronic smoothing. To me, that is not artistry. It is doing what comes naturally to women: using their sexuality to sell themselves. 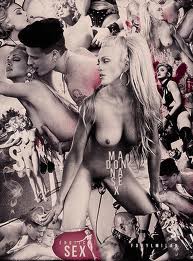 Miley Cyrus is what Madonna’s zero sum game has left behind. Madonna knew as a young Catholic girl that raising your skirt, even a little bit, commanded attention. Boys (and some girls) would stare and drool, adults would be offended. The result: attention. While many famous people before her had also learned how to harness that power (Marilyn Monroe, whose image Madonna spun from) there would usually have been some kind of important artistic contribution to go along with it. Madonna kind of walked that line. While she spent her career expanding in many different directions, always creating a new look and a new sound, her real talent ultimately had to do with borrowing from other people.

Most of those who followed in her footsteps did the same thing but none as blatantly, and frankly, as sad as Miley Cyrus, who had adopted much of her silly act from hip-hop, black culture, and then calling it her own, as Madonna did.

Camille Paglia has written the definitive piece on Miley Cyrus, though Paglia has her own humble to eat, as she has been one of Madonna’s biggest proponents, for years now, and is, in fact, credited with giving Madonna an aura of authenticity, of artistic validity.

Too much ink has been spilled already for the undeserving copycat, Miley Cyrus. And I know, here I am being offended. Paglia ends her essay with “go back to school.” I think Madonna helped prove you don’t need school to get people to notice you. You only need to know which buttons to push.