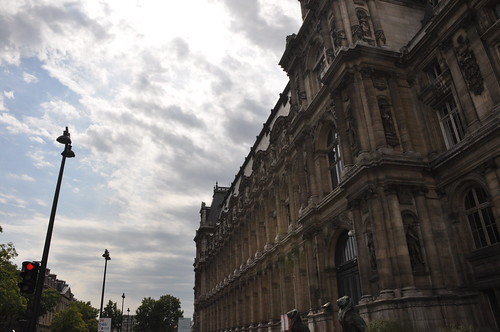 Memories fade if they aren’t retold in some way – either you retell them again and again, sometimes unreliably in your own mind, or else you repeat them to someone, write them down in a journal (I’m really bad at that, but I do write on this blog occasionally) – photographs help greatly. So where were we? We were finding our way, at last, to the Louvre. 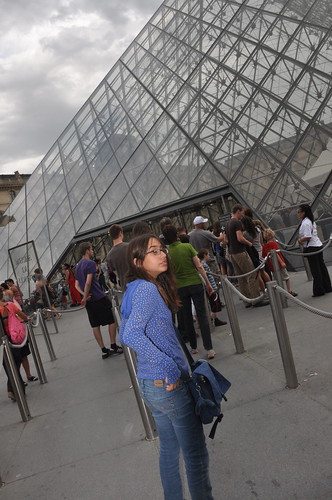 We knew we had to go; we didn’t want to go. I knew it was supposed to be big and crowded. Since we got there late in the day, with just two hours to see the whole thing, it wasn’t as crowded as expected. There were late-comers but most had wandered the halls already and seen what they had to see (Mona Lisa and the Venus) and still had time to see everything else. In my mind it was a bunch of old paintings Emma would not like very much, or else be bored looking at. One day she will have the context to really appreciate what she was seeing – this wasn’t going to be that day. We both knew the idea was to go to say we’d gone. 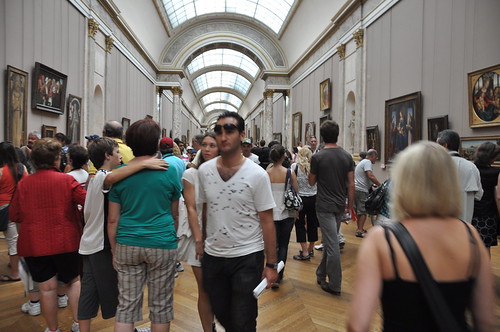 But like everything else in the Paris, the Louvre exceeds expectations on every possible level. It is modern and beautiful and full interesting, non-boring art. The only catch is that you have to have the time and energy to wander around. If you don’t you will be able to say you went but that is all. My advice to anyone going with a younger kid, don’t try to do the Louvre – it will be boring for them. But for a kid 11 and older? Absolutely take them. Give the a camera and let them take pics of the art (non-flash). 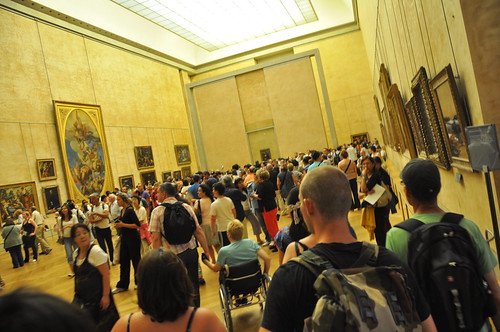 We did not have sufficient time and we were already dog tired. It was our third day – we had one more day left and we’d crammed as much tourism as we possible could into those first two days. We were so tired that we both felt like we had been swallowed by a giant whale when we tried to see the Louvre in just a short hour. We ended up parking it at a cafe (not Cafe Marly, which I couldn’t find, alas), for a croissant, a coffee and a hot chocolate. The first drops of rain of the day started to fall. Around us were tired tourists. One woman was laying her head on the table as she waited for her order to be taken. You know how French wait-staff are. They are slightly more motivated to serve Americans because they know we (stupidly) tip them. It is the only (slight) benefit to being an American in Paris. 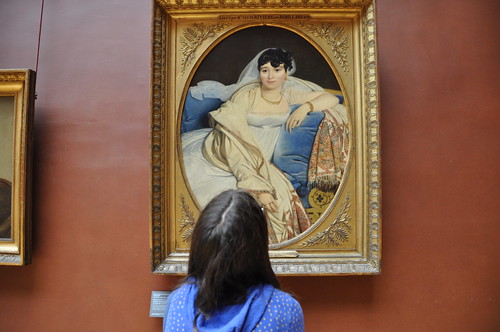 Emma had ordered an apple tart but got served an eclair instead. That was okay, though. I told her not to bother the waitress about it since it had already taken many long minutes to get served in the first place. I enjoyed my coffee but need I say it again that Italian coffee whips French coffee’s ass – and I’ll say it loudly and proudly that American coffee whips both of their assess if I’m the one making it. Italians corner the market on capuccino, though. You will never find a better one than in Italy. Never.¬† Ever. Paris coffee is okay. It’s perfectly fine. Nothing to write home about, even though here I am writing from home about it. 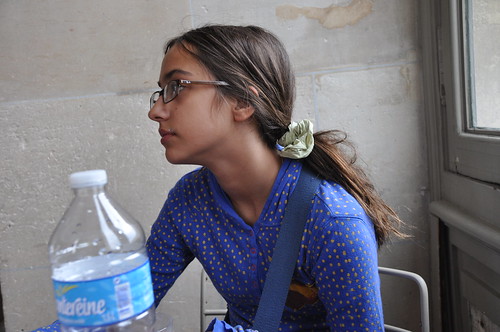 Sitting in that cafe, surrounded by tourists, in that old and beautiful building, with rain falling outside and a view of Paris around I had another surge of brief happiness about where we were and what we were doing. 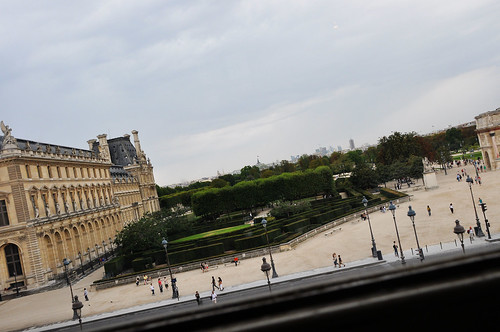 There was probably no greater moment for me than that. I spent a fortune, I nearly ruined my life upon arrival back in America, but those brief moments frozen in time in a place where romantic dreams turn into fully blown realities — we were caught in that elusive atmosphere of happiness. 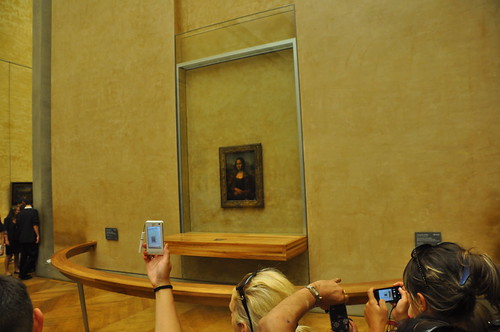 We saw the Mona Lisa – the poor thing. She hardly looks under siege, though. She smiled wrly back at the throngs as if to say – “you can’t touch me; I’m locked away behind glass.” It’s funny – she is like Paris herself. One has to see her – everyone wants to be near her but she’ll always be kind of remote, mocking you with her bemused expression. It’s a strange experience seeing something so famous. The Venus De Milo, like Michelangelo’s David, is breathtaking. 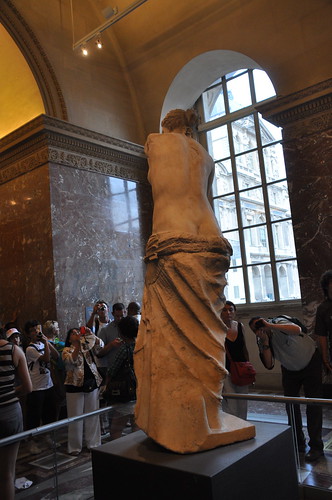 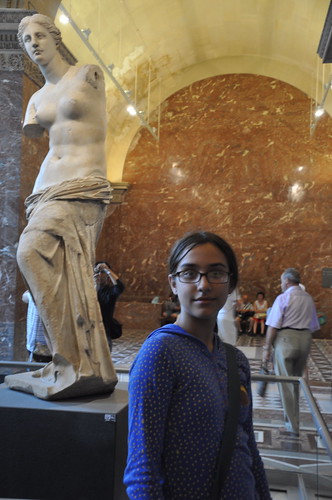 And that was that for the Louvre. We headed out in the rain and found our way back to the shuttle boat where we would attempt to head to the Latin Quarter for dinner — as it turned out, not the smartest idea. I stupidly thought the Latin Quarter was where the students hung out and therefore everything would be cheap. But in August, in Paris, there are no students. Parisians hightail it La Plage and out come the tourist prices. So good luck finding anything cheap in Disneyland – I mean fake Paris, I mean the Latin Quarter. Yes, it is still beautiful, of course, like everything in the city of lights.

She did, however, take a few snaps of the area – they have kid’s eye view: 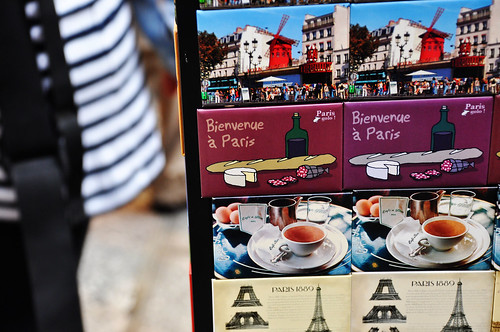 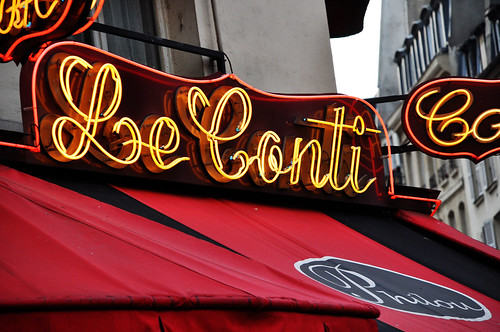 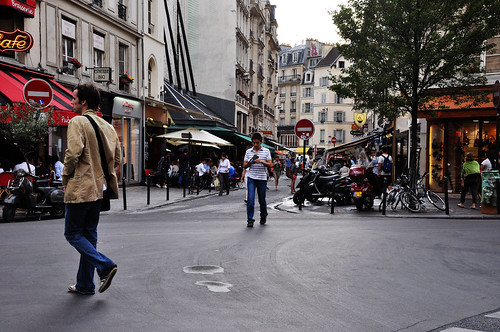 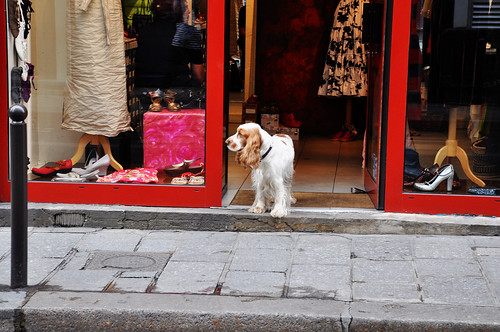 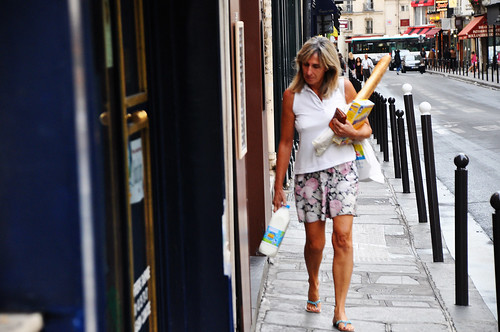 With the kid in full whine mode about being tired and hungry, we had no choice but to pick this one restaurant. Of course, the kid’s menu was like $12 Euro, which is around $16 or something like that. So Emma tried her luck at a hamburger (it was served Atkins-style, with no bread) and I had some kind of chicken and frites that was just about the most tasty thing I’d ever had in my life.

The real thrill of it, though, was meeting a fellow American who was there hanging out after taking his adoptive son’s brother back to Romania. It was a harrowing story but he and his wife were doing this great and charitable thing. I briefly thought about being ten years younger and child-less and would I sleep with this dude if given the opportunity. I didn’t know the answer but I kind of liked thinking about it. He was attractive, southern, and his eyes undressed every woman that walked by – I figured he was on-the-make. I am pretty much past my sell-by date so it wasn’t even a consideration – but we enjoyed chatting across the small restaurant while fielding angry looks from the Parisians nearby – it was a sign of the times, though, that the restaurant was nearly empty.

Both of us Americans agreed that everything was too expensive and that we both needed to get back to America where things are a tad more manageable.

Dinner was delicious, memorable, expensive. We found our way back to our shuttle bus in the dark and we took our last boat ride down the Seine to the boat’s last stop, the Eiffel Tower. We got out of the boat and walked underneath the lit up Eiffel Tower, which twinkles around 10pm. It is so lovely to walk under – and there are so many people there, even late at night. We wandered down the neighborhood and took our last walk through the park to our hotel. At that hour Paris comes to life – Europeans are funny how they like to eat so late and stay up at night. I guess they must sleep late too.

We made it home and crashed. We had one more day, one more night and then … home.