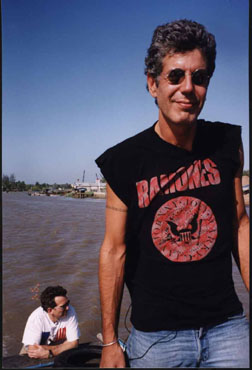 Funny Bourdain – former exile from the Food Network seems to take particular glee in tearing them down, and we love reading it. He has been given a spot on Ruhlman.com and many of us foodies eagerly await his Food-TV teardown posts. His recent one on the Food Awards is a howler. Like this:

Do Emeril and Bobby–who, whatever you think of their shows–BUILT that fucking network, deserve to be pimped out with such casual disregard? Does anyone deserve to run the Gauntlet of Shame that was the “red carpet”, forced to waddle past the California Raisins and Tony the Tiger and a bunch of other corporate Big Heads? The overmuscled fuckwit from DINNER SLIGHTLY DIFFICULT delivered the best line: something like “This is the greatest night “ever!” If that was his greatest night ever, I suspect he would say the same thing while being publicly butt-slammed by the San Diego Chicken.