On Robin Williams and Depression 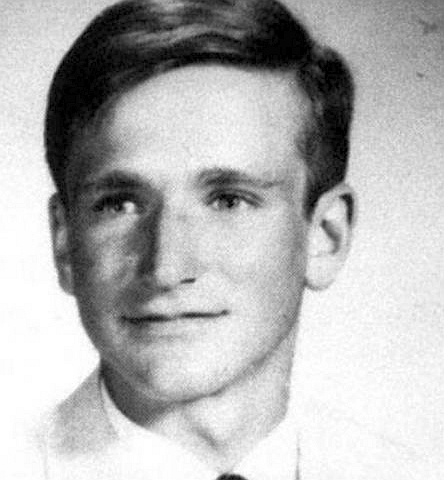 “The so-called ‘psychotically depressed’ person who tries to kill herself doesn’t do so out of quote ‘hopelessness’ or any abstract conviction that life’s assets and debits do not square. And surely not because death seems suddenly appealing. The person in whom Its invisible agony reaches a certain unendurable level will kill herself the same way a trapped person will eventually jump from the window of a burning high-rise. Make no mistake about people who leap from burning windows. Their terror of falling from a great height is still just as great as it would be for you or me standing speculatively at the same window just checking out the view; i.e. the fear of falling remains a constant. The variable here is the other terror, the fire’s flames: when the flames get close enough, falling to death becomes the slightly less terrible of two terrors. It’s not desiring the fall; it’s terror of the flames. And yet nobody down on the sidewalk, looking up and yelling ‘Don’t!’ and ‘Hang on!’, can understand the jump. Not really. You’d have to have personally been trapped and felt flames to really understand a terror way beyond falling.”
― David Foster Wallace

“Others imply that they know what it is like to be depressed because they have gone through a divorce, lost a job, or broken up with someone. But these experiences carry with them feelings. Depression, instead, is flat, hollow, and unendurable. It is also tiresome. People cannot abide being around you when you are depressed. They might think that they ought to, and they might even try, but you know and they know that you are tedious beyond belief: you are irritable and paranoid and humorless and lifeless and critical and demanding and no reassurance is ever enough. You’re frightened, and you’re frightening, and you’re “not at all like yourself but will be soon,” but you know you won’t.”
― Kay Redfield Jamison, An Unquiet Mind

“Dearest, I feel certain that I am going mad again. I feel we can’t go through another of those terrible times. And I shan’t recover this time. I begin to hear voices, and I can’t concentrate. So I am doing what seems the best thing to do. You have given me the greatest possible happiness. You have been in every way all that anyone could be. I don’t think two people could have been happier ’til this terrible disease came. I can’t fight any longer. I know that I am spoiling your life, that without me you could work. And you will I know. You see I can’t even write this properly. I can’t read. What I want to say is I owe all the happiness of my life to you. You have been entirely patient with me and incredibly good. I want to say that – everybody knows it. If anybody could have saved me it would have been you. Everything has gone from me but the certainty of your goodness. I can’t go on spoiling your life any longer. I don’t think two people could have been happier than we have been. V.”
― Virginia Woolf

I can’t pretend to understand the kind of depression people talk about. The kind that is a disease. The kind you can do nothing about, the drug companies say, except take drugs to make you feel normal. I don’t understand because on some fundamental level I reject the notion that drugs are the cure for this. At the same time I don’t judge – how could I – a person who is in so much pain they want out of this world. That, I understand. I understand flat misery. I understand wallowing in and accepting the futility of it all, the worthlessness of human life on earth. I understand having good reasons to be depressed. I feel like – if you look around the world and see what it REALLY is you would naturally be depressed or else so heavily medicated or self-absorbed you don’t notice anything except that which affects you directly.

I understand our living contrary to our nature. I understand how Facebook and Twitter can be the most depressing thing you will interact with all day. I can understand grief. I understand deep loneliness. I understand hating yourself for not living up to anyone’s expectations, least of all, your own.

I understand where Robin Williams was coming from. But the thing is, for me, once you have a kid that option is taken from you. That, and the knowledge that this is all we have, this life. There is a part of me that is waiting to see how everything turns out. Another part that wants to help change things for the better. Still another part that wants to leave a lasting contribution to humanity. All of these things Robin Williams did tenfold. He helped make the world a better place. He left a lasting contribution. He had beautiful children he loved and women he devoured. His was a full and complete life. All that was left was what could remain in his career and many days watching things slow way down, feeling the body grow weaker, wait for life to TAKE YOU instead of you making the choice to end it in your own way.

For me the only lure of suicide is the idea that you, me, we could die any time. Literally, we could go any minute in a variety of ways both sublime and mundane. Williams had heart surgery – hard core, debilitating surgery that certainly would have given him a clue as to how close he is to the end. Remember when Tony Scott took a jump off that bridge and killed himself and no one knew why? Middled aged white men are the highest demographic for suicide and half of me wonders if it isn’t just a logical solution to hurrying up the inevitable once there is nothing left to live for.

I guess, in the end, I can’t quite get there. Not yet. Not with a young daughter just graduating high school. Not with so many Stephen King books left to read. Not with all of the people I love so dearly and owe my time and torture to because they are here, they are young, and they have lives to lead. No, I would probably take massive amounts of drugs if I thought I was close to killing myself.

That kid, remember that kid in that documentary who killed himself so young? He’d wanted to from such a young age. He just wanted to die. I don’t get that. I could try and understand vis a vis medicating people and kids TOO YOUNG. But I don’t think that is a thorough explanation.

What we do know about suicide? It’s been around a while. A long while. Attitudes towards it have changed. We live longer now than we ever have before and therefore value our lives more. But still, the dark promise of nothingness? Isn’t that what we live in fear of every day? I do. I can’t imagine staring down that big sleep. I wish I could live forever.

My life is half over. I’m almost 50 years old. My hair is starting to get grey. Fat likes to gather in my mid-section. Other than that, and some age spots, I’m in pretty good shape. I figure if I don’t die of some terrible awful mundane event – like choking on peanuts, getting electrocuted by a hair drying or, god forbid, lightning, or get shot, or get in a car accident – the dreaded thing — a place crash (egods) – then I’m most likely to die of a heart attack probably nearing the age of 70. That gives me 30 more years. My daughter would then be 46. That is still too young to lose her mother so I hope to tack on another 20 from 70. It is my hope that by the time the end comes, like Lauren Bacall’s 89, I will feel too tired to stay on earth another day and the big sleep will come at me like a relief.

I love everything about the life I have now. I have very little regrets — if I had to name them it would be the times I believed men who were liars. That’s the hard part. They wasted my time. My precious time that I can’t have back. Tell the truth, always, even if it’s painful. Don’t spare someone their feelings because you waste their time.

The worst thing about Robin Williams’ death is that he leaves the door of suicide open to so many out there. It isn’t his fault nor his obligation, of course, to suffer his pain for other people but children of suicide victims are much more likely to commit suicide, for instance. But his children were so loving in their reactions it proved what a mensch he was in life and then in death. He just wanted out. A clean out. To end the misery. On some level they seemed to understand that. He was a good egg, plain and simple and it seems as though everyone he touched understood that. The last thing his final act seemed, to me, was selfish. He probably had no other option at that point. The wolf was at the door.

It is the goodness in us that we still want to reach out and grab him before he goes, to beg him, to hold him, to plead with him not to go. You see, we are really the selfish ones. We want him back. Everyone is dying. All the time, every minute. We have to say goodbye to everyone we know some time. No matter how we do it it always hurts.

I can’t help but think any minute he’s going to jump back and say “just kidding!” He makes me want to believe in Neverland.