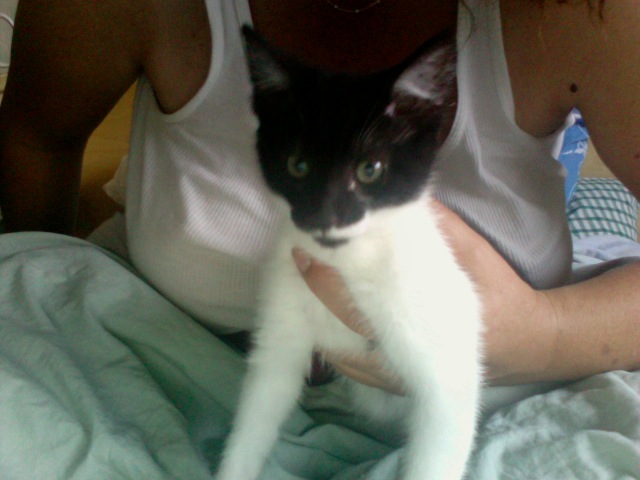 A day or so later they couldn’t find much wrong with him except he had a hernia and a chipped shoulder bone. He was still trying to walk around. My sister took him home that day, since they were charging $140 a day to just keep him under observation. Listen, vets will soak you in emergency situations. My sister figured she could nurse him back to health.

The plan was that we would take the cat after his sojourn at her place and when he was ready we would take him. We have two Siamese cats already who have run of the place.

My sister nursed him back to health. Tamed him from being a wildkin, an outdoor animal living on his wits. Soon he warmed up to her and would come out purring in need of attention. At some point it was time for the handover. She took him to the vet and I came to pick him up. From the moment I saw him it was love at first sight. It is impossible to resist any kitten, but especially one that has survived a near-death experience. He laid on my chest quietly and calmly and I thought, wow, what a calm kitty.

He was completely quiet on the whole car ride back to my place. I was stunned by this. Looking back on it, he must have been in shock.

I put him in my room, as the other cats prefer my daughter’s room down the hall. I did some research on how you introduce a new kitten to an established indoor clan. Turns out, you have to basically wait a week and then do it slowly. I decided to just give them a glimpse of each other and it completely freaked out my big cat. Like fur flying, hissing, whining, eye of the tiger, kill factor rage.

I will own up to the fact that I have two very strange cats. They are indoor and have never really been around any other animals, let alone cats. They watched birds through the window and every once in a while a dog visits, but for the most part, they think themselves one of us. The four of us females have been living harmoniously for three or four years now. So the interloper was bound to cause some problems.

The cute thing about him is that he sleeps in a tiny, furry ball near on my neck. He also thinks my typing keyboard is a toy. Everything is a toy, though. Every last thing. The key is not to let him sleep for long spells during the day. Otherwise he is a holy terror all night long.

I love the little bugger, though.